The Alpujarras is a hidden corner of Andalucia, located on the southern flanks of the mighty Sierra Nevada mountains, between the enchanting city of Granada and the coast of the Mediterranean. It is a wonderful place for a holiday and for relaxing generally. It is ideal for walking and offers a vast range of options from challenging high level snow line walks to casual meanderings around the valley. Wherever you go you are accompanied by the sound of water, either from the racing Rio Trevelez and Rio Poqueira, or from the innumerable irrigation channels delivering water to the cultivated land.

It is a unique area, treasured by the Moors until they were expelled by the Christians in the 15th century, and still shows many signs of their occupation. Most notably the style of Berber architecture, little white box shaped houses with flat grey roofs supported by sturdy chestnut timbers. Much of the land is made over to small walled terraces, many of which are still under cultivation and produce bountiful supplies of vegetables, fruit and olives. One of the factors that makes the area special is the greeness of the landscape throughout the year thanks to the quantities of irrigation water that run along ancient channels all summer long. The higher slopes are forested with pines, and oaks tress, whilst around the villages can be found magestic chestnut, plane and ash trees.

Mulhacen is the highest peak in the area (and in mainland Spain) at a little under 3,500 metres. Cortijo Opazo is situated on the edge of the National Park at a height of 1,250 metres. The area enjoys an excellent climate. The conditions of Andalucia in southern Spain ensure that there is plenty of sun during the winter months when the weather is usually warm enough for t-shirts and light clothing during the day. The summer months are hot (normal maximum of 32 degrees) but the altitude means that when evening comes there is always a delightful stream of cool air flowing down the valley from the high Sierras, a type of natural air conditioning.

As the Spanish know, there really is no other area like the Alpujarras. Throughout Spain it is known as a mystical area whose fresh water springs hold special properties and whose valleys have always been home to independent people, to artists, artesans and subsistence farmers. The Alpujarras can provide everything a person needs to live, be it food, clothing or warmth. If you visit this remote 'kingdom' you will understand why so many have chosen not to leave. 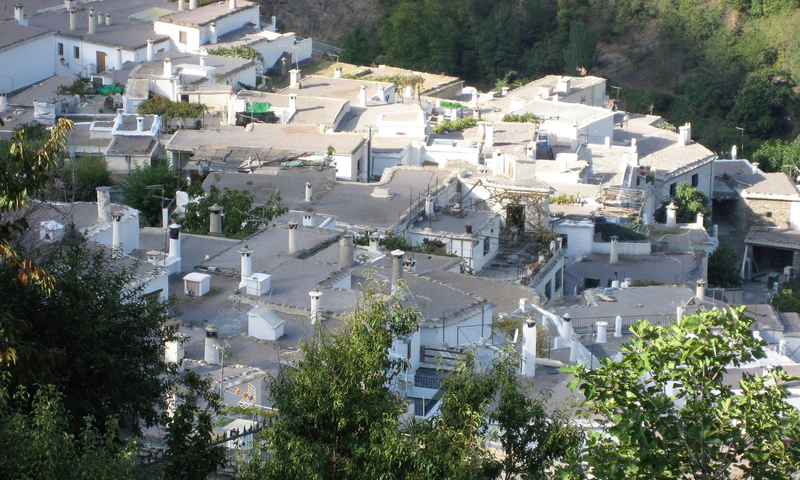 The cascading flat roofs of a typical Alpujarra village

A note about Alpujarran Villages

Villages of the Alpujarras are characterised by their architecture.  Clustered tightly together around the contours of the hills they look impenetrable.  Streets are often no wider than the breadth of a laden mule and narrow passageways twist and turn through this labyrinth.  The houses are usually made of stone with flat slate roofs supported by ancient chestnut beams.  On top of the flat slate roofs is packed a layer of water proof clay know as launa.  The crown of Alpujarran architecture is the distinctive chimney, perched like a top hat in a hundred different jaunty angles.

These villages are a pleasure to walk amongst.  A hot summer's day will reveal the ingenuity of their design, houses protected from the strength of the sun by thick stone walls and overhanging tinaos - a type of shaded verandah.  The most typical examples are to be found in the high Alpujarras; they seem to straddle the 1000 metre level - Cortijo Opazo is located at 1250 metres.  It is possible that the Moors who built these settlements at this height knew what they were doing by locating their dwellings below the winter snow line but high enough to enjoy the cool mountain air in the summer.  Towns in the valleys seem to have missed this trick.

The distinctive villages of the high Alpujarras are considered to be a cultural treasure and as such have been awarded a high level of protection against out of character developments. The villages and the terraced landscape are classified by the Spanish government as being of 'Special Cultural Interest'.